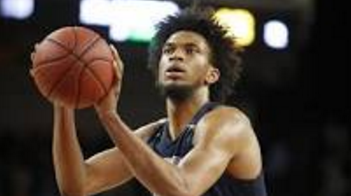 At 11 P.M ET, Marvin Bagley will decide where he will attend for college. I will be breaking down the percentages, in terms of the chances of each teams where he might attend, and also my prediction for where he goes. The teams include Kansas, UCLA, Arizona, Kentucky, USC, and Duke. Let’s get straight into the percentages for each team, starting with Kansas.

Kansas lost power forward, Jack Whitman, leading fans hopeful Marvin Bagley might join them. However they waited and waited for a visit from Bagley, which never happened. Kansas only have a 2% chance because of the fact that he never has expressed any willingness to sign with them.

Slightly higher then Kansas, Arizona also didn’t get the visit they wanted from Bagley. Marvin Bagley is from the area, going to high school in Temple, Arizona as a freshman and Hillcrest Prep as a sophomore. The fact he lives in the country of Arizona really is the reason that they they have a 1% chance to land Bagley over Kansas. I do not think he will be attending Arizona, ultimately.

Again like Kansas and Arizona, Kentucky did not get the visit they really wanted from the #1 2018 recruit. The Wildcats have the best recruiter, John Calipari on their side. That is the reason they have a higher chance then Arizona and Kansas. Kentucky can go to Bagley, stating why he should come. They can talk about many players they have put in to the NBA, notable big men are Demarcus Cousins, Anthony Davis, and Nerlens Noel. If they can give him a great pitch over the phone, he might be lured in. However they can not give him that pitch on the campus as he decided not to go look at the University of Kentucky.

Marvin Bagley did indeed look at UCLA, and the fact that there are guys like Steve Alford and Lavar Ball luring Bagley to join Liangelo Ball and UCLA, means it is a possible destination for the five star recruit. Just imagine a pairing of Lavar Ball and Marvin Bagley. It would almost be like Popovich and Kawhi Leonard. Aside from the jokes though, Bagley would love to attend the team with the most NCAAM Division 1 Championships. UCLA is close to his hometown in Arizona, and the team would make Bagley the focal point, the guy to feed the ball to. I do think UCLA is a possible option, and one he is defiantly considering.

USC, an up and coming basketball college. The trojans are known to be a football team, but with Bagley would possibly make them a basketball school, or at least at the same level as the football team. If Bagley went to USC, he would be the best athlete they have in the college. We have seen players like Ben Simmons and Markelle Fultz choose the smaller schools rather then large schools like Kentucky or Duke. The thing with USC, Bagley’s brothers have been offered deals by the team and that could lure Bagley to the team. I mean, you know you want a player when you are offering a scholarship to a 7 year old younger brother whenever he gets to college. The brothers have to be trying to get Marvin Bagley to join the team. That could be why he joins USC.

The Blue Devils are a team that have already got the 19th best recruit according to ESPN, Tre Jones. Him being a point guard gives him a one to punch with the possible recruit in Marvin Bagley. I mean, if you have Bagley on the Duke team, it would already make them contenders for a March Madness title. Bagley also has his grandmother living close to Duke, which in case he might feel homesick elsewhere wouldn’t be a problem in Duke University. I am pretty sure that unless a huge flop in recruiting, Duke will land 2 top 10 recruits regardless of getting Bagley or not. However if you get a good tall top 10 center and a good shooting guard, this team could possibly win the title. If Bagley wants to win and be coached by the best coach at winning basketball games, he will choose to sign with the Duke Blue Devils.

I stated that clearly I do not believe Kansas and Arizona will sign Bagley III. So it really comes down to Kentucky, UCLA, USC, and Duke. Remember, what I said earlier does not impact my prediction. I think those are the percentages for where he signs, it still means that with a small chance there is a possibility he will sign with the team. So it doesn’t necessarily mean he will sign with 63% Duke, it could even mean that I predict he goes to Kansas. So will it be an upset, or will it be the Blue Devils?

I will start by talking about Kentucky. Kentucky is a team that gives Bagley a free pass to the NBA. Kentucky has been the best team with putting players in the NBA. I feel with Bagley, he doesn’t want to sign there. He didn’t even pay a visit to Kentucky meaning that it probably won’t happen. I don’t think he will end up signing with Kentucky basketball.

The next team to cross off is UCLA. I understand that he has visited UCLA however I just don’t see enough information on why he might join UCLA. I just don’t see it really happening. UCLA have their plans with the Ball family and what not, and Marvin Bagley seems like he should go in another path. I don’t know, maybe goes there but in my mind he won’t commit.

So it all comes down to this decision, wether I go with Duke or USC. The team I pick is the University of Southern California. We see players that went #1 going to the small teams. LSU and Washington proved that in the past years. Let’s talk about Duke. Duke tried to sign the #1 recruit Ben Simmons a few years ago. They had about a 75% chance to sign Simmons, which was proved wrong in the end. That percentage was based on 247sports.com, their crystal ball predictions. With only a 25% chance, he signed with LSU. What about Okafor and Harry Giles? Well they had over a 90% chance to sign with Duke. Simmons and Bagley do not have over that 90% percent chance. That is why he won’t sign with Duke.

I have 2 reasons why he will sign with USC. The one reason is the fact that players tend to choose the underdog. As I said, Simmons and Fultz did end up signing with small colleges. Plus, Simmons had a 75% chance to sign with Duke. That is a big red flag to me and one of the main reasons. The second reason is Bagley’s twitter. Look at this series of tweets that Bagley ended up retweeting.

Yes Marvin Bagley did end up retweeting this series of tweets. You can even look at his twitter, I will leave a link right here: https://twitter.com/mb3five

So yea, in my mind Bagley will end up signing with the University of Southern California. I would like to see him go to a larger team like Duke so that I can see him perform on live television. But, we have to see what happens if he does end up signing with USC.