Karl-Anthony Towns could possibly be on the block for the Timberwolves this off-season, as Brian Windhorst came out saying this quote:

Towns is a franchise player for teams in the NBA, as not only is he an all-star caliber player but he is also only 22 years old.

Zach Lowe then came out and gave a statement which is the following:

Finally, I want to show what former Towns teammate Devin Booker posted on Twitter after these stories came out:

And that didn’t stop there with Booker’s tweets. Here is another one in response to Zach Lavine’s response. 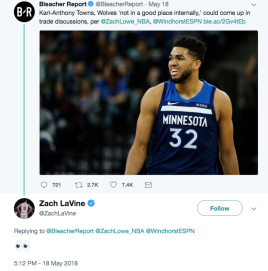 Devin Booker wants the Suns to trade for Towns, shown by his two tweets.

It isn’t like the Suns don’t have any assets either. If the Timberwolves feel that they should trade Towns, it may mean that Butler and Wiggins are going to go as well. I would not be surprised if they traded their players for top 10 picks, building a young foundation to build around. The Suns in the draft lottery received the #1 overall pick, meaning that the pick is incredible for trading purposes.

But then you also have to think, why would the Suns want to give up the #1 pick in which they would probably draft Deandre Ayton, the 19-year-old center out of Arizona. The Suns GM, Ryan McDonough, came out with this statement:

The Suns are open to making a trade with another team, and when you are talking about a few players in the league that the pick could be traded for, you probably have Towns listed as one of them. Towns this season put up 21.3 PPG, at the age of 22. Combine that with Booker, who put up 24.9 PPG at the age of 21. That is a dynamic duo that would contend in the NBA for many years.

The thing that sweetens the pot for me in this deal is the way Booker is handling this. He wants to contend, he has the urge to make the playoffs. The Suns know that if they do not please him, he could be in the front office next year demanding a trade. At the end of the season, he said this to the press:

He wants to make the playoffs, and he needs players around him to do so. The other reason on why I rate this deal so much is because of what the GM came out and said.

If you look at the NBA, franchise players make moves for their teams. If Lebron James wants to get a player, the front office will find a way to get said player. If Anthony Davis wants a player, the Pelicans will get that player. He wanted an all-star around him so that he could contend in the playoffs, and he got DeMarcus Cousins.

To sum this up, I think that Devin Booker wants to make the playoffs and is going to get the Suns front office to trade the #1 pick for Towns. If Towns is unhappy in Minnesota, he will request a trade and will be available for the Suns to snatch up. I believe that Towns will be wearing a Phoenix jersey on an NBA court next year.