Hello everyone, today I will be filling out SB Nation’s bracket on who is the best one on one player in the NBA. As the title says, it is just like how March Madness is played, 64 teams go in the bracket and the only one can win the title. Here is the tournament below! 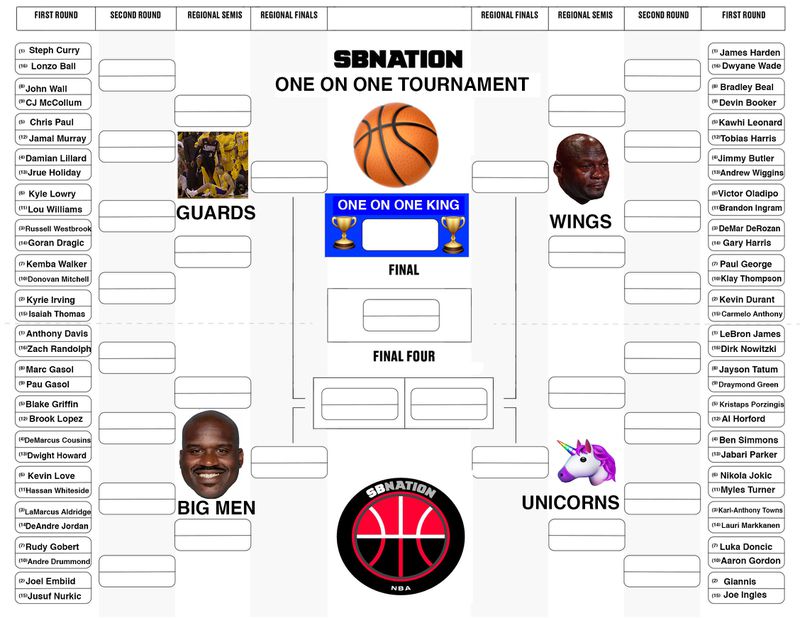 No UMBC upset here, Steph Curry beats Lonzo Ball as Lonzo cannot guard Curry in a one on one situation. Ball’s passing ability will not help him in a 1 v 1, and his streaky shooting is a key reason he loses.

Wall has the experience, is the best player on his team, and is also beating McCollum in the 5 main statistics people talk about. Wall has 18.9 PPG, 4.4 RPG, 9.2 APG(Not that it matters in a 1 v 1 but I will still include it), 1.7 steals per game and also 0.7 blocks per game. On the other hand, McCollum has three years less experience, is only the 2nd best player on his team and has a stat line of 17.2 PPG, 2.9 RPG, 2.9 APG, 0.9 steals per game and 0.3 blocks per game. Don’t even start with player efficiency rating, Wall leads that at 19.08 while McCollum has a PER of 17.67. Wall wins this matchup, however, it still is a close game. You may not know this, but McCollum is actually the faster of the two. That is the area of his game where he can utilize so he can cause an upset. Nevertheless, I pick John Wall to win as he has a better stat line then C.J. McCollum.

We have an upset alert for this game as I believe Jamal Murray would win this matchup. Murray has a 3-inch height advantage and is the faster player. Murray clocks in at a 4.61 average speed while playing, while Chris Paul has an average speed of only 3.86. With that in mind, we know how teams cause upsets in March Madness. You have to have to have the heart and mental strength to beat a team. If Jamal Murray knows he will be facing an 8-time all-star, he’ll want to prove himself. To add on to this, when Murray gets on a streak of 3-pointers you can’t stop him. Remember the 2017 rising stars challenge? Well, Murray hit 9-three-pointers, and there was no stopping him. I believe Murray wins do to the 3-inch high advantage, his ability to hit consecutive threes in a row, and also the fact he is a lot faster and a lot younger.

For Jrue Holiday, this is a nightmare. Damian Lillard is someone who is meant for this challenge, as he resembles a perfect one on one player. There is no way Holiday wins this matchup. I believe Lillard would win this 11-3, as Holiday just would not be able to stop the all-star who is in his prime.

Honestly, I don’t see how Kyle Lowry can win this matchup. Kyle Lowry is the Xavier in the tournament, a team who also gets seeded really high but can never live up to those expectations. Lou Williams has been one of the most surprising players this season, and it feels like he is in his prime right now. Lowry is getting worse by the year, and I feel in 3 years he will be an average starter or even a sixth man. You think of this, and it is crazy how Lowry is only a year older than Williams at the age of 32. I believe Lou Williams has got more in the tank then Lowry, and so he will end up winning this game.

Westbrook and Dragic share one thing in common, the physicality that the two players have. What separates Goran Dragic’s level with Russell Westbrook’s level is the athleticism. Westbrook can run past a whole team, while Dragic is not able to do that. Remember this dunk vs the 76ers, https://www.youtube.com/watch?v=axfuXEBa-Bo? Goran Dragic would not be able to do that, and that is the reason he will lose to the 2016-17 M.V.P.

Right now Donavon Mitchell is having Jazz fans saying, Hayward who? His season he is having is incredible, and I believe he will have a better career than the likes of Dwyane Wade. I can save that explanation for another blog post. His dunking ability is incredible, however, that is in situations where no one is guarding him. In a one on one, you have tight defense and Mitchell’s dunks won’t help him as much as they do in NBA games. Walker has the experience and is also scoring more points then Mitchell is this season. Walker takes this game, even though it is another very close one.

Isaiah Thomas has changed so much in this past year, and sadly it is not in a positive way. It is sad to see a guy put so much faith into his franchise that he plays through his injury just so his team can win. Yet, later on, they trade him to the rivals. Then he falls out of place on the Cavs and gets traded to the Lakers. And then, he comes off the bench for the Lakers and it all went downhill. Last year I honestly would have picked Isaiah Thomas to win in a close game. However this year, Irving is winning in a blowout. The fall of Isaiah Thomas is one of the saddest stories to hear about this year.

Thank you for reading today’s blog post and have an amazing day!